The Linux TOP command provides valuable monitoring and troubleshooting information. However, there is a lot of information in a very condensed format and it can be tricky to sort through what is important and what isn’t. 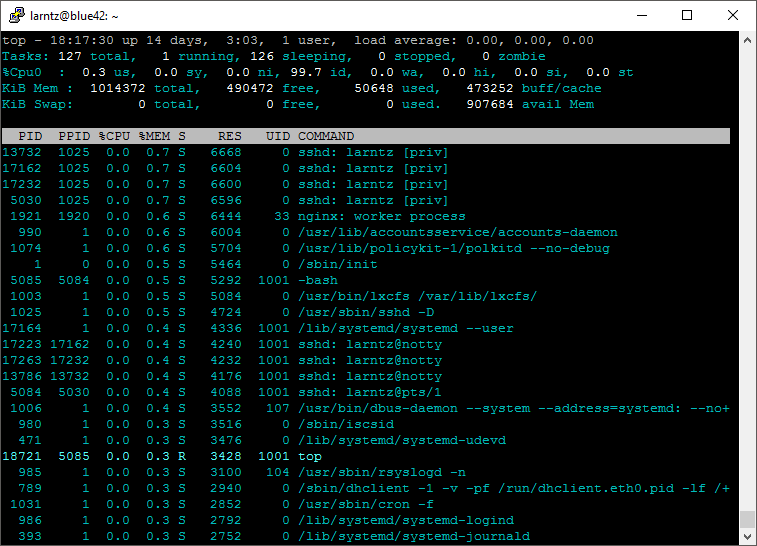 THE TOP OF TOP

The first few lines of output from TOP give you a system overview. It shows up time, users, load average, CPU and memory statistics.

Line 1 shows the system time and up time (14 days). We see one user is logged in and our system load average is 0.

Line 2 shows Tasks (or processes). We can see here we have 127 total processes, 1 running, and 0 stopped or zombie processes. A running process is actively doing using CPU and a sleeping process is waiting for something to do. We’ll see later how to see which PIDs are in what state. Pressing t will alternate the Tasks display

A stopped process is a suspended process. This process has been suspended manually (CTR-Z) or could be being traced. Neither of these are a big deal, but if you have more than one or two stopped processes and you don’t know why there may be something goofy going on.

A zombie process is the coolest sounding process, but the uncoolest to actually have. This is a process that has finished (exited), but is still on the process table for some reason. Here again, having one or two isn’t going to cause you issues, but if you have more than a few it probably indicates something gone awry.

Line 3 here is our CPU stats. If you are on a multicore system you are going to have a line for each core. While top is running pressing 1 will switch between one line per core and one line for all CPUs.

There are some detailed CPU stats on this line also.

** Line 4** are the memory statistics. These are a lot more obvious than the CPU stats.

** Line 5** is related to swap space. This should normally be pretty low. I don’t seem much swapping on any current system. If used is high you probably need more RAM.

I am generally only concerned with a few of these details. I set TOP on my systems to display the following information:

There are a lot more features and options available when using TOP, but this covers most of what you need to know when looking at a system. If you are troubleshooting and you find an questionable area of the system you may need to refer to the TOP man page or use other tools to continue tracking the problem.